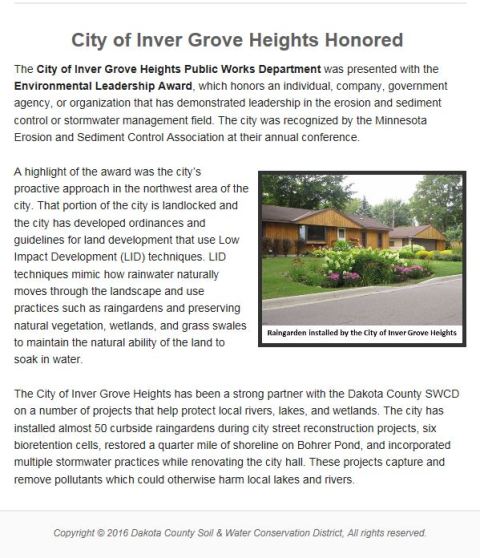 At the annual conference on January 28, 2016, it was announced that the 2016 Environmental Leadership Award was given to the City of Inver Grove Heights by the Minnesota Erosion Control Association (MECA) for the city’s role in “Designing a City for Zero Stormwater Runoff”. The City worked with the local firm Emmons & Olivier Resources (EOR), a nationally recognized leader in water resource engineering and management, in “Designing a City of Zero Stormwater Runoff”. This award builds upon the project’s recent state and national engineering recognition in 2015 from the American Council of Engineering Companies (ACEC) where it was honored as one of the top eight engineering projects in the country. The MECA award highlights the project’s “leadership in advancing effective erosion and sediment control and Stormwater Management … that have advanced water resource quality in Minnesota.”